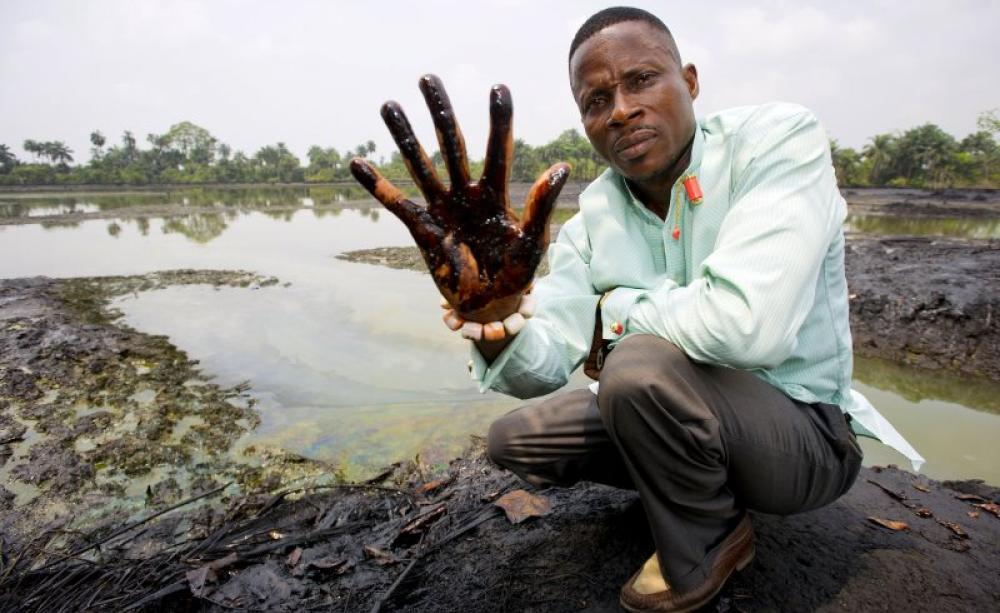 Oil pollution in Ogoniland, Niger Delta. Photo: Milieudefensie via Flickr (CC BY-NC-SA).
A year after Shell was forced into a £55 million settlement with an indigenous community in Nigeria devastated by oil spills, a UK High Court judge has allowed two new such cases to proceed on behalf of some 43,000 subsistence farmers and fishers whose livelihoods have been wiped out by the same cause.

It is scandalous that four year after the UNEP Report Shell is yet to clean up its oil in either Ogale or Bille. Our client's patience has now run out and we intend to force Shell to act since it is clear they have no intention of doing so on their own.

Two new cases against Shell, the oil multinational, have today been allowed to proceed by in the High Court in London.

The cases were filed by London law firm Leigh Day on behalf of two Nigerian communities in the Niger Delta who have been affected by oil pollution: the Ogale Community in Ogoniland and the Bille Kingdom.

Judge Raeside QC ruled that formal legal proceedings can now be served on Shell Nigeria (the Shell Petroleum Development Company of Nigeria Ltd) who will be joined to the English proceedings alongside Royal Dutch Shell plc.

In an important precedent in January 2015 that followed a three-year legal battle in London's High Court, Shell agreed to pay out £55 million to some 15,600 Bodo farmers and fishers following oil spills in 2008 and 2009, which devastated the environment surrounding the community of Bodo, Rivers State, Nigeria.

Court documents also revealed that internal emails and reports showed that senior Shell employees had expressed concern as far back as in 2001 of the need to replace oil pipelines in the Niger Delta, describing some sections as containing "major risk and hazard".

Many more claims where these ones came from

Shell's failure to maintain and protect pipelines may leave it liable to further a raft of compensation claims from dozens of Niger Delta communities, Amnesty International warned today.

In its investor briefing, Shell's growing liabilities in the Niger Delta: Lessons from the Bodo court case, Amnesty International advises Shell's investors that failures in the way the oil giant inspects and reports on oil spills could mask the scale of potential financial liability arising for Shell.

Amnesty International's UK Economic Affairs Programme Director Peter Frankental said: "Shell has an appalling record of obfuscation and misinformation with regard to its dealings in the Niger Delta. Our briefing reveals just how irresponsible Shell has been in its operations in the region.

"It's disgraceful that Shell has to be dragged to the courts to address these issues. Surely time, money and the health, livelihoods and emotional anguish of the affected communities could have been spared had Shell simply accepted responsibility and cleaned up the oil spills quickly and thoroughly.

"We hope that the Bodo case and this new lawsuit will spur Shell on to accept its responsibilities by cleaning up the oil spills and compensating those in the Niger Delta whose lives have been devastated by them."

It is scandalous that four year after the UNEP Report Shell is yet to clean up its oil in either Ogale or Bille. Our client's patience has now run out and we intend to force Shell to act since it is clear they have no intention of doing so on their own.

Ogale, located in the Nchia region, Rivers State in Nigeria, has an estimated population of over 40,000. Residents have traditionally been either crop farmers or have relied on the Ogale Stream, its tributaries and waterways as fishing areas.

However, Ogale has been subjected to repeated oil spillages across much of the community since at least 1989. At one spill site at Okuluebu, it is estimated that there were 87,500 barrels of oil remaining at the site when the United Nations Environment Programme (UNEP) conducted investigations in 2010.

An especially severe spill occurred in 2009, as reported by Amnesty International in November 2015. When its researchers visited the site of the spill they saw farmland and swamp heavily polluted, with black patches covering the ground, and a strong smell of oil.

In 2011 the United Nations Environmental Programme (UNEP) published an Environmental Assessment of Ogoniland which included extensive testing of the Ogale Community. The UNEP Report found that Oil spills in Ogoniland happen "with alarming regularity" and that "it is a fair assumption that most members of the current Ogoniland community have lived with chronic oil pollution throughout their lives."

The Ogale Pipelines and Infrastructure are several decades old and in a poor state of repair making the area vulnerable to oil spills which have caused, and continue to cause, long-term contamination of the land, swamps, groundwater and waterways in the Community.

The Community are now claiming for compensation and seeking to get Shell to clean up the damage caused by their oil. HRH Emere Godwin Bebe Okpabi, the Paramount Ruler of Ogale, said:

"Shell have polluted our land and our streams and drinking wells for years. Even when the UNEP report suggested that something urgent should be done, Shell did not even come to see our community or to talk to us. No-one is listening to us, no-one cares. We hope at last this case will force Shell clean up at long last."

Bille, also in River State has a population of nearly 13,000 living in a number of island towns and fishing settlements that are surrounded entirely by water.

They have traditionally relied on fishing to sustain their way of life, however, following reated oil spills from the Nembe Creek 30" Trunkline (NCTL) their livelihood has been destroyed. Most properties on Bille have been damaged by the pollution and residents have even been forced to stack sandbags outside their homes to try to prevent oil entering their properties.

The NCTL stretches for almost 100 kilometres and was built in 1981 and although money was recently spent to replace it, Shell failed to install leak detection systems to prevent and detect operational spills and/or protect against third party interference, known as 'bunkering', in breach of Nigerian legal standards.

According to the legal action, the creeks, mangroves and island communities in Bille have allegedly been devastated by oil emanating from the NCTL since the replacement of the Bille Section of the pipeline in 2010. It is alleged that 13,200 hectares of mangrove have been damaged by oil spilled from the Bille Pipelines and Infrastructure.

The key issue in the claim will be whether Shell can be liable for failing to protect their pipelines from damage caused by third parties - generally criminals deliberately breaching pipelines in order to steal oil.

In the judgment handed down in the Bodo litigation, it held that where it can be shown that Shell neglected to protect their pipelines properly, they could be liable for the damage arising from their neglect.

This claim seeks to confirm the findings of this judgment and if successful will mark a significant expansion in Shell's liability for their activities in Nigeria.

Daniel Leader, partner in the International Group Claims team at Leigh Day said: "It is scandalous that four year after the UNEP Report Shell is yet to clean up its oil in either Ogale or Bille. Our client's patience has now run out and we intend to force Shell to act since it is clear they have no intention of doing so on their own.

"Given the extent of the damage, we believe that the clean up costs for both communities will run into several hundred million pounds. The claims from the thousands of individuals affected by this pollution, could run into tens of millions of pounds given the impact on these communities."

Shell: 'our actions have been lauded across civil society'

A spokesperson for the Shell Petroleum Development Company of Nigeria (SPDC) said: "We are at an early stage of reviewing the claims made by the Bille and Ogale communities. Both Bille and Ogale are areas heavily impacted by crude oil theft, pipeline sabotage and illegal refining which remain the main sources of pollution across the Niger Delta.

Ogale is in Ogoniland and it is important to note that SPDC has produced no oil or gas in Ogoniland since 1993. Access to the area has been limited following a rise in violence, threats to staff and attacks on facilities.

"The Bille and Ogale communities have chosen to bring these claims in the UK instead of in Nigeria, whose laws govern our operations. It is our intention to contest the jurisdiction of the English court over these claims. We believe that allegations concerning Nigerian plaintiffs in dispute with a Nigerian company, over issues which took place within Nigeria, should be heard in Nigeria."

"Furthermore, Ogoniland is the area covered by the United Nations Environment Programme's Environmental Assessment (‘the UNEP report') of 2011. UNEP presented its recommendations as an opportunity to bring a culture of multi-stakeholder cooperation to Ogoniland, a process in which SPDC has been involved. SPDC has also initiated action to address all the recommendations directed to it in the UNEP report as operator of the SPDC Joint Venture.

In mid-2015 SPDC JV, along with the government, UNEP and representatives of the Ogoni community, agreed to an 18-month roadmap to fast-track the environmental clean-up and remediation of Ogoniland which includes a governance framework.

"These steps have been widely lauded across civil society in Nigeria and have been welcomed by members of the Ogoni community itself. Asking the English court to intervene and order remediation activity covering the same ground as the UNEP implementation plan is a direct challenge to the internal political acts and decisions of the Nigerian State, and its sovereign right to determine, within its own territory, the appropriate future path for the Ogoni community."