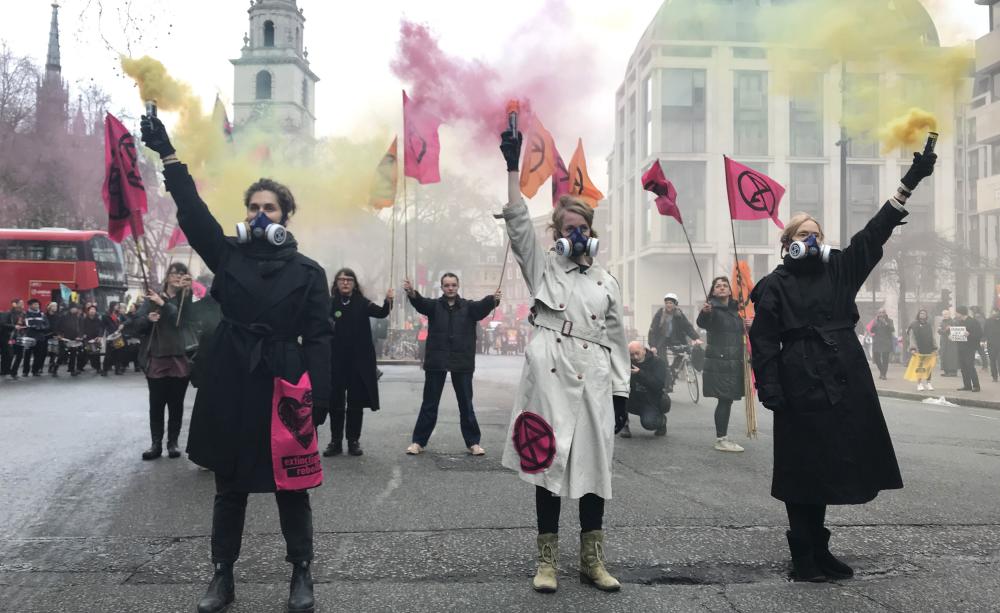 Dozens of demonstrators prevented traffic from passing through a busy intersection leading to The Strand in Westminster, where the world-famous trade show is being held.

As queues of vehicles started to build up, taxi and lorry drivers could be heard honking their horns and swearing at the protesters.

The action was part of the environmental campaign group's calls for an end to London Fashion Week, which runs from February 14 to 18, claiming the industry is a major contributor to climate change.

Demonstrators initially blocked three roads for about 20 minutes before letting traffic pass. They then moved further down The Strand to block two lanes.

At one point a motorbike mounted the pavement to get past the group. A taxi driver shouted "Just f****** move" to a samba band which stood in front of cars playing music,

Protesters carried placards reading "No more false fashion" and "No fashion on a dead planet", while others wore dresses made from chains.

It comes after Extinction Rebellion members delivered a letter to the British Fashion Council (BFC) on Monday, calling for it to cancel the next London Fashion Week, in September.

Sara Arnold, who helped co-ordinate the protest, said: "London is home to the cutting edge of sustainable and ethical design, and yet, London Fashion Week lags behind.

"And, despite having an active political engagement programme, you have done almost nothing to lobby for environmental policies, without which a transition with the urgency we need is simply impossible.

"We have all failed but now radical leadership is required. We need you, the British Fashion Council, as appointed industry administrators, to find the power and courage to centre a visionary process and protocol, without delay."

Ms Arnold said if the BFC does not cancel the September event, Extinction Rebellion will "build pressure" and "escalate" its actions.

Last September, protesters covered in fake blood glued themselves to the entrance to London Fashion Week, blocking access to the trade show.

Speaking to climate change campaigners, she said: "London Fashion Week is a perfect place to showcase these new changes we could have for our world.

"We should be excited about being creative and innovative with our clothes, not just in style but in the production of the clothing.

"This is the place to lead by example and change the way we understand fashion. Isn't that in itself a dream for artists?"

As at 11.30am on Saturday, traffic was still unable to access two lanes of The Strand, leading to Waterloo Bridge. A third lane remained open. The demonstration was due to finish at 1pm. The British Fashion Council has been contacted for comment.

Luke Powell is a reporter with PA.