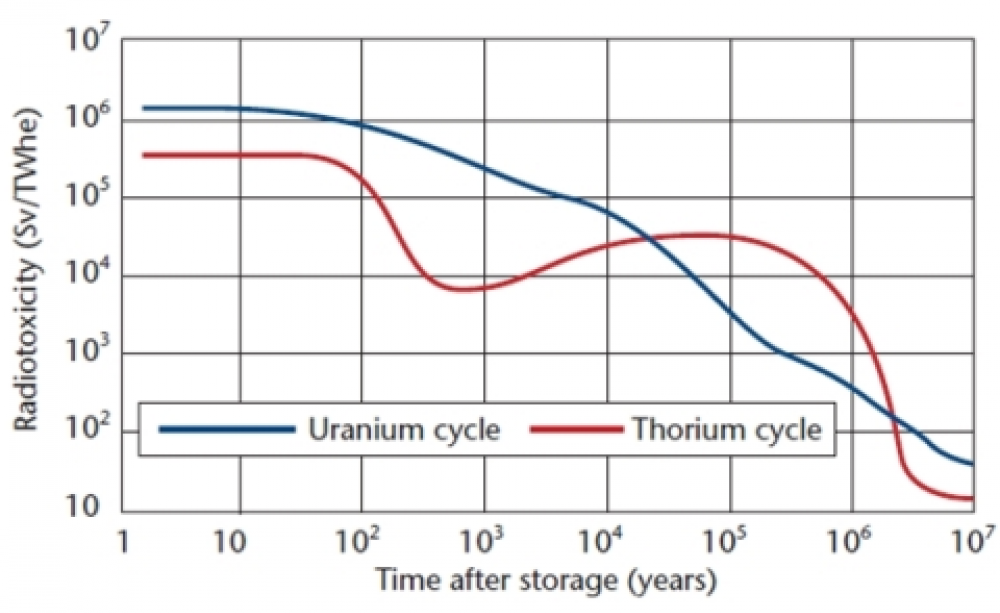 The radiotoxicity of nuclear waste from uranium and thorium based fuels compared. Image: Nuclear Engineering International magazine.
Nuclear enthusiasts have been singing the praises of nuclear reactors that use thorium as their fuel instead of uranium. Jan Beránek analyses the claims - and finds that thorium is a mere distraction on the way to our renewable future.

It's awfully late to be thinking of developing a whole new fuel cycle whose problems differ only in detail from current versions.

Both were named after ancient gods: Uranus was the principal Greek god of the sky while Thor was the Norse (and broadly Germanic) god of thunder.

There's a modern mythology surrounding thorium and uranium too, such as the currently very popular suggestion that thorium can replace uranium and deliver much better (safer, cheaper, fuel abundant) nuclear energy.

We've heard it all before

Well, we've heard all these things from advocates of nuclear energy before, haven't we? Weren't we told in the 50's, 60's, 70's, 80's, 90's and even until recently that all these miracles would actually be delivered by uranium fueled reactors?

Yeah, something obviously went wrong because none of those dreams actually came true, despite half a century's worth of effort and hundreds of billions in subsidies poured into the nuclear industry.

What are the chances that replacing the Greek god with a Germanic one will help? Would Thor take his powerful hammer and nail it all down? Not likely.

It's still a fission technology

Thorium technology is based on nuclear fission and therefore keeps fission's inherent problems. It partially addresses one of the downsides of current commercial reactors based on the uranium / plutonium fuel cycle.

That one downside is the production of (mostly unwanted) plutonium and other long-lived transuranic isotopes. The thorium cycle does indeed produce much less of these. So far, so good.

However thorium retains all the other main hazards - in fuel mining and fabrication, reactor safety, production of dangerous waste, and last but not least, nuclear weapons proliferation.

As Amory Lovins put it in 2009: "With uranium-based nuclear power continuing its decades-long economic collapse, it's awfully late to be thinking of developing a whole new fuel cycle whose problems differ only in detail from current versions."

Let's look more closely at some of the hopeful claims around thorium.

Thorium is abundant, uranium is running out

It's absolutely true that uranium reserves are limited, and that the world is turning to ever lower-grade, and more expensive to process (in money and energy) uranium ores. It's also true that thorium is abundant and 'cheap as chips' - it's produced as a waste product of rare earth mining.

But the benefit is not what it's claimed to be. The uranium 'shortage' applies only to fissile U-235. However the world is awash with non-fissile U-238 as the leftovers of uranium enrichment. The U-238 is however 'fertile' - it can be transmuted into fissile plutonium-239 under neutron irradiation in a reactor.

And that's exactly what governments and the nuclear industry have been trying, and failing, to turn into a viable nuclear fuel cycle for six decades in so called 'fast breeder' reactors.

It's awfully late to be thinking of developing a whole new fuel cycle whose problems differ only in detail from current versions.

And in this respect thorium is exactly the same. Thorium-232 is non-fissile, but fertile, and can be transmuted into fissile uranium-233 under neutron irradation in a reactor. Until you do that, it is to all intents and purposes inert.

And given that all over the world, U-238 / Pu-239 fast breeder reactors have proved to be technical and economic disasters, do we really want to bet the farm on making them work with thorium?

The risks inherent in nuclear reactors are due to the massive concentrations of radioactive materials and the huge amount of heat they produce (which is actually needed to generate electricity).

No matter if the fuel is based on uranium or thorium, if it's solid or liquid, this characteristic alone will inevitably continue to be the Achilles heel of any nuclear reactor.

As you can read in the Union of Concerned Scientists' briefing on this issue, the truth is that the US Department of Energy concluded in 2009 after a review that:

"the choice between uranium-based fuel and thorium-based fuel is seen basically as one of preference, with no fundamental difference in addressing the nuclear power issues ... "

It's obvious that fission applied to different nuclear fuel results in a different composition of radioactive waste. But it's still radioactive waste and whether the waste produced by thorium reactors is really less problematic (because there's little or in an ideal world no plutonium in it) remains an open question.

Spent thorium fuel still contains long-lived isotopes such as proactinium-231 (with a half-life 32,000 years which is even longer than plutonium Pu-239) which implies the need for long term management in timescales comparable to typical high level waste from uranium reactors.

Not surprisingly, a chart published in Nuclear Engineering International magazine in November 2009 shows that the radiotoxicity of spent thorium fuel is actually higher than uranium spent fuel over the long term, ie after first 10,000 years. [See image top-right]

Yes, thorium can't itself be used to build nuclear weapons but it can't be used directly as a nuclear fuel either. In fact, it has to be first transmuted into the fissile uranium isotope, U-233.

And that's an isotope that is suitable for nuclear weapons. Thorium enthusiasts claim that the inevitable presence of the highly penetrating gamma emitter U-232 as a contaminant would make this impossible.

However the US successfully detonated a nuclear bomb containing U-233 in 1955 in the Nevada Desert as part of its Operation Teapot - the so called MET (Military Effects Test) shot.

The UK Department of Energy and Climate Change commissioned a report which concluded in 2012 that the claims by thorium proponents who say that the radioactive chemical element makes it impossible to build a bomb from nuclear waste, leaves less hazardous waste than uranium reactors, and that it runs more efficiently, are "overstated".

Another report on thorium finds that in an LFTR (liquid fluoride thorium reactor), the continuous pyro-processing / electro-refining technologies intrinsic to the design (if they ever actually work) "could generate streams of U-233 very low in U-232 at a purity well above weapons grade as currently defined."

So where are these fantastic thorium reactors?

Thorium reactors exist only in blueprints and early experiments, which means there could be other issues not yet detected that would complicate their large scale implementation.

In any case, this also means that it would take much longer than a decade before thorium reactors would potentially become available for a larger commercial deployment.

Recent studies, like the one published by the Norwegian Thorium Commission, while being supportive of the concept, also conclude that there are many uncertainties and problems related to it.

It notes that Norwegian thorium reserves are of limited economic attractiveness compared to other sources; that accelerator-based reactors will be viable in the distant future at best; that thorium reactors would create nuclear waste problems; and that any of this will require massive international research.

It cannot compete economically with uranium

Related to this is thorium's unknown economic performance. Experts suggest that one of the key reasons why thorium reactors are not being developed is that they cannot compete economically with uranium fuel-based reactors.

This is mainly because so many billions have been invested in characterising and optimising the uranium / plutonium fuel cycle - and similar sums would have to be invested all over again to do the same for thorium. Add to that the costs of more complicated fuel fabrication and processing.

And current pressurized water reactors are already uncompetitive. With investment costs of current reactor technology easily reaching $8,000 / kW of installed capacity, it is difficult to imagine that thorium reactors would be developed and built in foreseeable future.

All in all, it rather looks like the nuclear industry, failing terribly to provide a reliable and affordable energy source, is trying to divert our attention from its scandals and incompetence to a distant, rosy dream. Not bad PR but not much else.

While we are once again told to dream about a bright nuclear future, modern renewable energy technologies are already cheaper and upscaled well beyond nuclear.

The future is renewable!

Let's not get distracted. Let's not waste even more time, money and brainpower on trying to make the impossible: a nuclear energy source that would actually really work. The future is renewable, and that's where we need to go as quickly as possible.

Jan Beránek is the leader of Greenpeace International's Energy Campaign.

Further information: Thorium: not green', not viable - A briefing by Oliver Tickell for the former directors of Friends of the Earth.

This article was first published on Greenpeace's Blog. It has been supplemented by The Ecologist, most importantly with the addition of one entire section: 'Thorium is abundant, uranium is running out'. 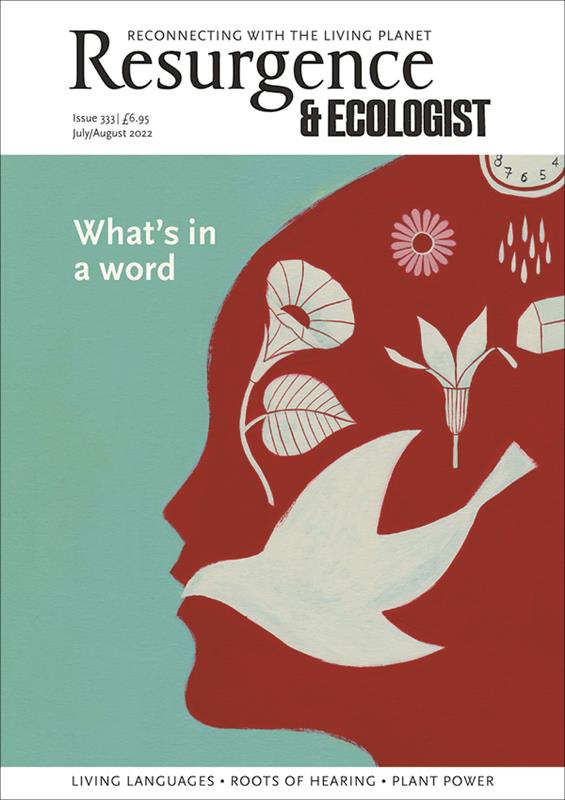