Tory Conference: pledge the UK to the Global Apollo Program 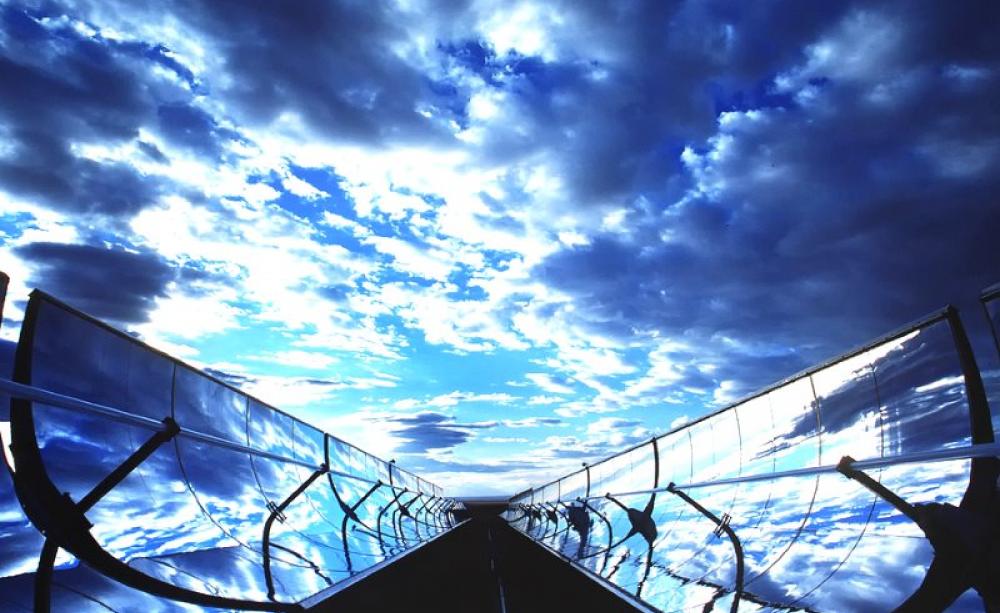 Parabolic Trough Collectors in New Mexico, USA. They work by concentrating the sun's rays on an oil-filled tube running along the focal line of the trough. Photo: Randy Montoya / Sandia Labs via Flickr (CC BY-NC-ND).
The government has an opportunity to show real leadership on energy and climate change this week, writes Richard Layard - by making the UK the first country to sign up to a global research effort to replace fossil fuels with renewables as the world's primary power source.

The top priority for the programme will be the storage of electricity. Smart grids with 'responsive demand' will also be essential. But equally important is sheer reduction in the cost of generating electricity from sun and wind.

Leaders around the world speak often of their concern about, and desire to tackle, climate change.

Indeed we can expect to hear more on this theme coming from Energy Secretary Amber Rudd at this week's Conservative Party conference in Manchester - and possibly even from the Prime Minister.

Of course the government has been criticised for its deep cuts to subsidies for wind and solar energy installations since it was elected in May.

But there is an much bigger international failure that desperately needs to be tackled. Incredibly, only 2% of the world's public R&D is directed towards meeting this challenge. This must change.

This is why 27 world-leading scientists, executives, academics and politicians including David Attenborough, Brian Cox, Paul Polman, Jeffrey Sachs, Arunabha Ghosh Carlo Carraro, and Nilesh Jadhav are backing the Global Apollo Program: a proposal for a concerted, international effort of research and development.

The objective is blindingly simple. If clean energy can be made less costly to produce than energy from fossil fuel, fossil fuel will stay in the ground.

The aspiration of the Program is to increase government spending on research to at least $15bn a year globally for the next 10 years to make this happen.

The need is urgent, which is why supporters are calling on nations to adopt the Global Apollo Program (GAP) by the time of the UN Climate Change Conference in Paris in December.

Why the Global Apollo Program is needed

Climate change threatens us all with increased risk of drought, flood and tempest, which in turn will lead to mass migration and conflict. On present policies the world's temperature will reach 2°C above the pre-industrial level soon after 2035 and stay above that level for a few centuries.

Eventually the whole Greenland ice cap will have melted, and the sea level have risen by 6 metres.

Fortunately governments of the world are beginning to realise the case for publicly-funded research to stop this happening. After the G7 meeting in Bavaria in June this year, the leaders declared:

"We will work together and with other interested countries to raise the overall coordination and transparency of clean energy research, development and demonstration, highlighting the importance of renewable energy and other low-carbon technologies. We ask our Energy Ministers to take forward this initiative and report back to us in 2016."

The Global Apollo Program is the obvious way to proceed. Like the moonshot Apollo programme before it, it is a 10-year project with one clear goal: to reduce the cost of clean energy, and to do it fast. Within 10 years, base-load electricity from wind or sun has to become less costly than from coal throughout the world.

The top priority for the programme will be the storage of electricity. Smart grids with 'responsive demand' will also be essential. But equally important is sheer reduction in the cost of generating electricity from sun and wind.

Although undeniably a challenge, the authors of the Global Apollo Program, including myself, think it is. There is an almost exact precedent in the history of semi-conductors, whose price has fallen steadily for 40 years. This is called Moore's Law, but it did not happen by magic.

It happened largely through a major pre-competitive programme of research and development, financed chiefly by governments. This whole effort has been coordinated by an International Technology Roadmap Committee of the world's leading countries and companies. This committee has identified year by year the bottlenecks to further price reduction, and commissioned research to unblock those obstacles.

Leading scientists like Martin Rees and businessmen like John Browne believe that the same could be done with energy from sun and wind. The price of silicon photovoltaic solar modules (which are semi-conductors of a kind) is already falling rapidly, as the graph (above right) shows.

But it needs to fall even further and faster, as does the cost of the remaining 'balance of systems'.

Though in many sunny areas solar, and in many windy areas wind, are now competitive when they are in use, they are intermittent. They cannot currently provide a 24-hour service.

For sun and wind to be able to provide continuous electricity, we need cheap methods of storing electrical energy, better ways of feeding intermittent electricity into the grid, more long distance interconnectors, and a 'smart grid' in which demand at any moment adjusts to the available supply, not just the other way as at present.

And, to further cut CO2 emissions, we need to be able to electrify all land transport, which means cheaper mobile storage of electricity.

These are significant scientific and engineering challenges. They are problems, like putting a man on the moon, that can be cracked if the effort is properly organised and financed. Hence the proposal for a 10-year Global Apollo Program involving as many of the world's nations as possible.

To take the space analogy further, at current prices the moonshot cost $15 billion a year for 10 years. That amounts to 0.02% of today's world GDP and provides an appropriate minimum scale for the Global Apollo Program.

Our proposal, that any government joining the Program consortium will pledge to spend an annual average of 0.02% of GDP as public expenditure on the Program from 2016 to 2025, has been met with interest by governments worldwide.

Many of the world's leading nations have expressed interest, and we hope all major countries will join in the coming months. The Program will produce, year-on-year, a clear roadmap of the scientific breakthroughs required at each stage to maintain the pace of cost reduction.

There will be a Commission consisting of one representative of each member country and, under it, a Roadmap Committee of some 20 senior technologists and businessmen who will construct and revise the roadmap annually. By working methodically, and tracking breakthroughs as they occur, we believe a set of coordinated plans to tackle the roadblocks will emerge.

The top priority for the programme will be the storage of electricity. Unless this can be done more cheaply it will be difficult to roll renewables out beyond around 30% of total needs. Smart grids with 'responsive demand' will also be essential. But equally important is sheer reduction in the cost of generating electricity from sun and wind.

Although the programme will be co-located with the International Energy Agency (IEA) in Paris, it will of course include many countries not belonging to the IEA. Transparency will be key, and all results discovered through the programme will be made publicly available (although patentable intellectual property will be protected and will remain with those who made the discoveries).

Do we believe we can fix the world with this ten year programme?

Well, no. If we are to truly tackle climate change we need more energy efficiency, and taxes on carbon until fossil fuels finally disappear from use. But in terms of value for money, a Global Apollo Program is an essential component of any serious attempt to manage the risks of climate change. Without it, targets of emissions reduction will be extremely difficult to deliver.

At relatively small cost The Global Apollo Program will contribute powerfully to a safer and better world. It will reduce global warming, add to energy security and reduce the polluting effects of fossil fuels which now kill millions of people. It may even generate sufficient savings in energy costs to completely cover its own expense.

Hopefully by the end of the year all major countries will have decided to join and we will have taken the first steps to a coordinated and truly global effort to improve our world for the generations to come.

So if Amber Rudd and David Cameron want to give us something to celebrate on climate and energy at this week's conference, I have just the idea for them - to publicly commit the UK to the Global Apollo Program.

The G7 already endorsed the idea in principle at their June summit in Germany, but as yet no country has taken the pledge. That gives the UK the opportunity to be the first - and make itself a true global climate leader.