The 'slow genocide' of Brazil's Guarani people must stop 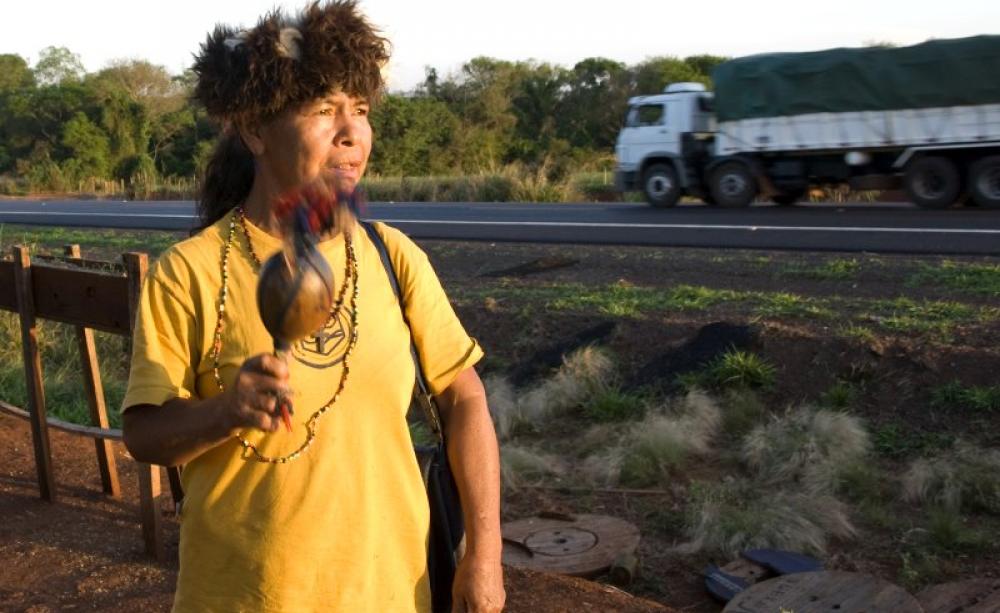 A Guarani woman at the roadside. Photo: Survival International.

Land theft, agribusiness and violence pose an existential threat to Brazil's Guarani people, writes Lewis Evans. They maintain a powerful resolve to regain their historic lands, and even have the law on their side - but the tribe will need international support to prevail against murderous ranchers and farmers, corrupt politicians and a paralysed legal system.

The Guarani are forced to live in overcrowded reserves, in makeshift encampments on roadsides, or on tiny patches of surviving forest, drinking water that is polluted by pesticides, and scratching out a living any way they can.

Survival International recently hosted a visit from Tonico Benites Guarani, one of the leaders of the Guarani Kaiowá people in southern Brazil. Few of us who work here have ever met a more measured, determined, or quietly courageous man.

Despite the sheer horror of the situation facing his tribe who, following the theft of their land, suffer constant violence, terrible poverty, and a growing sense of despair, Tonico remained calm when discussing his people's plight.

"Our young people's only choice is to work for pitiful wages in atrocious conditions in the sugar cane plantations that now occupy our ancestral lands", he says.

"If we cannot plant, what is our future? Begging is no future. If people do leave the communities the only work they can get is on building sites or in sugarcane plantations. Our young people have no choice but to do degrading work.

"We suffer from racism and discrimination. Until 1988 indigenous peoples in Brazil were not considered human beings in the constitution. This created racism and prejudice. It suggested Indians could be killed, were a free target ... If nothing changes many more young people will kill themselves, and others will die of malnutrition."

A dark and bloody history

The Guarani have had to endure a lot over the past five centuries. They were one of the first tribes in what would eventually become Brazil to be contacted by Europeans, suffering all the violence, enslavement, plunder of their land and infectious disease that that entailed.

But being far from the coast, on land that was difficult to exploit on a large scale in the early stages of colonization, the Guarani Kaiowá were saved from the wholesale genocide inflicted on other peoples. Until the 20th century, they had a relatively tranquil relationship with mainstream Brazilian society.

In the 20th century all that changed. Eager to seize the rich red soil of the Guarani's land, ranchers moved in, cleared the tribe's forests and opened it up for cattle ranching and agri-business. Now rather than nourishing the tens of thousands of Guarani people, as it did for generations, the land is turned over to profit. Vast quantities of soya, sugar cane, and other cash crops are forced out of it every year.

Despite the wholesale destruction of their environment, the Guarani remain, though their lives are more difficult than ever before. They are forced to live in overcrowded reserves, in makeshift encampments on roadsides, or on tiny patches of surviving forest, drinking water that is polluted by pesticides, and scratching out a living any way they can.

The Guarani are forced to live in overcrowded reserves, in makeshift encampments on roadsides, or on tiny patches of surviving forest, drinking water that is polluted by pesticides, and scratching out a living any way they can.

If they try to return to their ancestral land, which they are cruelly partitioned off from by wire fences, they are attacked by mercenary gunmen. That any of them remain on the land at all is testament to their courage and resilience, and to their profound sense of connection to the land.

Land is more than just life to the Guarani, it is central to their entire conception of themselves. Their history revolves around it, and it is a central tenet of their religion. They call it "the land without evil" and their ancestors wandered for centuries searching for it.

Generations of their people are buried there, and they cannot countenance the idea of leaving. As far as they are concerned, there is no future without their land, no matter what condition it has been left in by outsiders.

From what was once millions of hectares of dense forest in the central core of South America, the Guarani are now reduced to tiny patches of land, islands they have claimed in a sea of chemically-enhanced plantation agriculture.

A strong sense of connection to the environment is a common feature among many tribal societies around the world, and this is particularly true of the Guarani. Land is not just a food source, a home, or a commodity to them, it is a totality, a universe to which they belong and towards which they have a deep responsibility.

Sadly the loss and destruction of their land has translated accordingly. Depression is rife among the Guarani, and Tonico's people, the Guarani Kaiowá, suffer the highest suicide rate in the world. Faced with the prospect of a life of poverty and perpetual struggle on the margins of a society they did not create and which offers them less than nothing, hundreds have tragically taken their own lives.

The solution is clear. Map out the Guarani's land and return it to the tribe, as Brazilian and international law demand. But waiting for Brazil's government - wracked by political chaos - or the country's courts, in which Guarani land cases are paralysed, to rule in their favor, has taken its toll on their morale. A deep sense of misery has set in.

Tonico spoke candidly about this terrible problem: "So many young Guarani people commit suicide. It's around one a week. The time comes when you have had enough of waiting [for change]. You work yourself up with hope, then the courts dash your hopes. Your family suffers with hunger and malnutrition, the despair increases, there is no security, no hope, you are not sure of life improving. It is very sad."

For speaking out and campaigning for their people's basic right to dignity and self-determination, Tonico and other Guarani leaders are harassed, intimidated, and attacked. He continued:

"A slow genocide is taking place. There is a war being waged against us. We are scared ... They kill our leaders, hide their bodies, intimidate and threaten us. Me, too, many times. Last month they telephoned me and warned me there would be consequences if I carried on showing a film about the Guarani to politicians."

Far from being sympathetic to the tribe's plight, the local government of Mato Grosso do Sul state is, in many ways, actively hostile to the Guarani.

Many local politicians and journalists are on the side of ranchers and soya barons who despise the Guarani and would love to see them wiped off the face of the earth. Tonico and other activists have found they must look beyond their home region for support, to the world's media, and to international NGOs like Survival International.

"We are always fighting for our land. Our culture does not allow violence but the ranchers will kill us rather than give it back. Most of the land was taken in the 1960s and 70s. The ranchers arrived and pushed us out. The land was of good quality, with rivers and forest. Now it is very valuable. The Guarani were living there for hundreds of years and we never suffered."

Despite the threats to his own life, Tonico hopes to at least reduce the level of violence being meted out almost daily against his people by making their struggle as visible as he can to the world. His real objective though is to exert pressure, on the Brazilian government and on agri-business to push towards a humane solution and a viable future for his people.

The situation may be bleak, but as long as the Guarani have brave leaders like Tonico to raise their voice, there is always hope that they can defend their lives, protect their lands and determine their own future.

Lewis Evans is an author, and campaigner at Survival International, the global movement for tribal peoples' rights.