Keeping the gas under the grass in Groningen 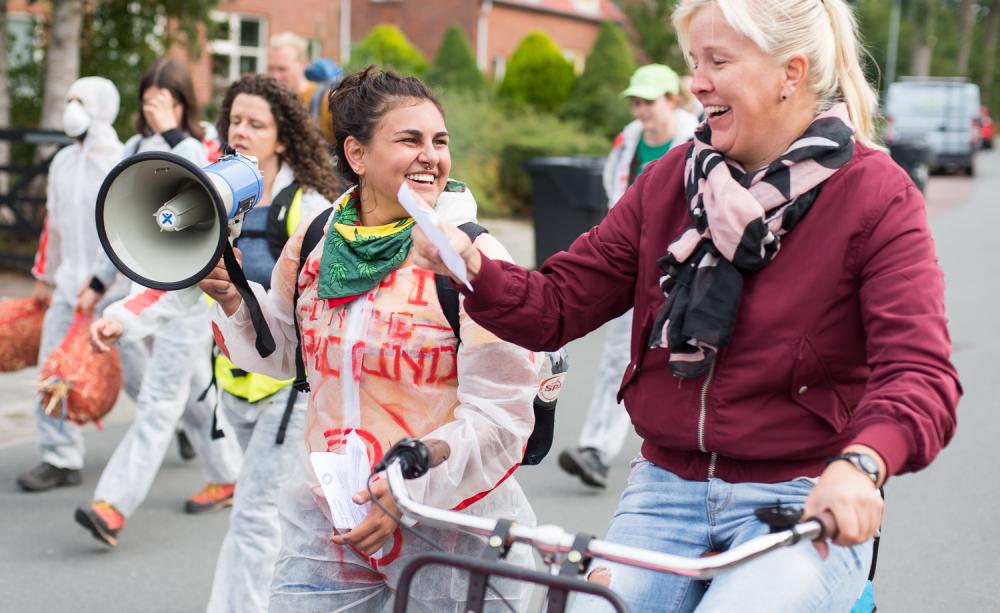 https://www.flickr.com/photos/code-rood/30453538618/in/album-72157700384360664/
Roman Kutzowitz, kutzowitz@protonmail.com
Gas-related earthquakes stirred Groningers into action a long time ago, but they are now joined by over 700 activists from all over Europe, who put their bodies before a crucial gate for tankers right now. NICK MEYNEN reports

It's not just about positive energy, our collective strategy is also working.

Not everything in this action is legal. But the action itself has legitimacy. In the scientific paper titled Is Earth F ** ked? geophysicist Brad Werner concludes with the words, "more or less".

But in his complex models, one variable gives hope: direct environmental actions by people who carry out blockades or sabotages and who go beyond the capitalist logic. That is what is happening in Groningen now.

Mathias, 30, is one of the busloads of participants coming from Belgium. This is not a first for him. He told The Ecologist: "Here I do not feel so powerless or alone anymore, in relation to the climate breakdown. But it's not just about that positive energy, our collective strategy is also working."

To keep it that way, Mathias gives trainings. “This is about peaceful collective civil disobedience to tackle the climate problem at source: the exploitation of fossil fuels. There is no room for rioting machos here," he said.

This is certainly clear at the last training session before the blockade, where I walk with the Belgian student Stephanie Colling Woode Williams, 27. She discusses with her ‘buddy’ what they are going to do if one of them is pushed to the ground by a police officer.

Stephanie says she is calm in confrontations with the police. "I have experienced worse in an anti-racism demonstration, where extreme right-wing opponents awaited us and pulled leather belts from their pants," she said.

At the training on Monday, Stephanie's affinity group was one of ten that practiced a so-called 'finger' exercise where a total of about 100 disobedient citizens break through a cordon of a dozen acting cops.

It is only one of the many preparations that the activists have been working on for days. At the training three real police officers were watching, but plenty more awaited the activists on Tuesday. Nevertheless, the blockade succeeded.

It's not just about positive energy, our collective strategy is also working.

The problem for police forces and for the governments they work for is that activists learn from each other and are getting better at this. Without a political revolution their numbers continue to grow.

The resignation of Nicolas Hulot as Minister of Ecological Transition in France this morning shows once again how difficult it is to bring about change through the usual political path.

There is a worldwide, below-radar mass of people whose patience ran out long ago. Someone who literally mapped that is the ecological economist Joan Martinez-Alier.

Together with activists from around the world, he and his academic team created an online atlas with more than 2,500 environmental conflicts, including maps with actions against gas and blockade actions.

He describes the emergence of a global movement for environmental justice, which in his opinion is not only more radical but also more efficient than the subsidised environmental movement.

In addition to the international aid, national solidarity is also visible everywhere: the Dutch support the Groningers in their struggle to stop gas exploitation that has been underway here for decades.

Actions such as ‘Support a Groninger’ and ‘Knit for Groningen’ touch many Dutch people. The fact that gas production in Groningen already caused more than 1,000 earthquakes affecting more than 100,000 people living in now unsellable homes has something to do with this.

Groninger Jan Dales, 58, is someone like that. "My father died of a heart attack that I directly associate with the corruption at the institution that refused to acknowledge the damage to his house."

Jan paid 2,000 euros to a certified researcher who proved that the house did indeed need considerable stability repairs - only to hit a brick wall of unwillingness.

With his lawsuit, he made it to national TV and he managed to get Prime Minister Mark Rutte to visit him in Groningen. "My troubled lawsuit suddenly caught a bizarre momentum.

"The day before Rutte came the judge decided that my complaint was inadmissible, after which the Prime Minister came to tell me that he could do nothing." Jan's had made up his mind: "Elections do not change anything here and the rule of law is rotten, so we're left with direct action".

Hanneke, 40, is the spokeswoman for Code Red, the movement that organises this action. She saw the will to action grow rapidly. "Code Red was created in the wake of the more established environmental organisations, in whose business model this kind of direct action to keep fossil fuels in the ground does not fit.

"People are tired of soft action, they want to take action right now. We make that possible."

The ongoing Code Red action is the largest ever in the Netherlands. The multinationals of this world may gain power, the same can be said of the multinational resistance against polluting companies. The history books will celebrate the people who resist.

In the meantime, it is forbidden in the Netherlands for any new building to have a gas connection. In Belgium, where one and a half million people depend on the gas from Groningen, only the obligation for a gas connection for new buildings has been abolished.

Belgium's government is lagging behind a rapidly changing situation.

The UK is even worse off, with the continuing push for gas, fracked or not. Forget the myth that gas is a so-called bridge fuel. A German think tank calls gas a bridge to nowhere. Gas is a bridge that is collapsing, with many of us walking right under it.

Nick Meynen is a geographer, author of Frontlines. Stories of Global Environmental Justice (now in Dutch, English forthcoming) and policy officer at the European Environmental Bureau. He's also a regular contributor to The Ecologist.