Is There Grass In That Milk?

In a recent survey of 600 farmers, 95% were in favour of cows having at least seasonal access to grazing.

Free-Range Dairy is a new initiative that could reverse the trend towards industrialised mega-farms.

The Ecologist office is set in an Area of Outstanding Natural Beauty within a United Nations Biosphere Reserve. Hartland peninsular is dotted with steep, wooded valleys where bluebells, early purple orchids and woodpeckers abound.The hills afford breathtaking views across the Bristol channel to Lundy Island, itself a nature reserve with a no-fish zone that is having a beneficial effect on marine ecology, and looking south-west down to Cornwall, on a clear day, one can see to Boscastle and Bodmin moor beyond.

But something is missing from this bucolic scene - one notices it first whilst walking the country lanes on a warm spring evening. There is no rhythmic munching of grass on the other side of the hedge; no bovine belching or contented sighing as the cows enjoy the sun on their backs after a long winter in the cattle yard. For here in Hartland, as elsewhere in the country, the trend is towards carbon-intensive, ‘industrialised' farming where huge herds of 1,000 cows or more are kept indoors all year long, with only a concrete yard for exercise.

Undoubtedly, farmers have been squeezed into such ‘economies of scale' by supermarkets that offer minimal profit margins and demand a uniform product; and also by the growing dominance of agro-technology that drives towards bigger, mechanised farms, but there are serious reservations about the long-term sustainability of this farming model.

One of the primary concerns of industrial-scale farming is that of animal welfare. When cows are confined in large numbers, bedded on sand, and forced into an unnatural feeding regime, their behaviour often changes which can lead to stress symptoms and ill-health. Cows farmed in this way are more likely than their pasture-based cousins to be lame and suffer from debilitating mastitis. As a result, the routine use of antibiotics in animal feed has become a cause for concern, specifically regarding antibiotic-resistant bacteria that are excreted and transferred to slurry lagoons.

As this slurry is then regularly sprayed onto surrounding fields, its impact on local communities and wildlife can be severe. A study conducted in North Carolina showed people who lived near intensive farms were significantly more likely to fall ill than those living in a rural setting away from industrial farming. Similarly, rates of asthma in children living near intensive farms are consistently elevated.

The sheer quantity of slurry waste from intensive farms is also concerning because of its impact on the environment whilst storing it and on spreading it. Leachate from slurry lagoons and slurry spreading has been shown to adversely affect rivers and ecosystems. Should any milk enter the wider ecosystem (having been flushed-away if a cow has mastitis or is on certain medication), eutrophication - the excessive loading of nutrients into the ecosystem - will occur. Its effects can be devastating, and include a massive overproduction of algae and a consequent lack of oxygen for fish and other aquatic species.

Here in Hartland, millions of gallons of slurry are spread on this small peninsular every year. We don't know if those mysterious strands of ‘scum' that appear in the sea each spring are a consequence, or if the slurry run-off is having an effect on the no-fish zone; we don't yet know if the foul-stench of endless slurry-spreading is affecting tourist numbers and local businesses; nor do we know if the regular increase in tummy upsets during the times of slurry-spreading is mere coincidence - and it seems it is up to us, the local community, to prove that we are being adversely impacted by too much slurry, before anything will be done about it.

Should this ‘mega-dairy' model become predominant, each one could displace up to 100 existing family farms from the market. Already, we have lost thousands of family farms: in 1970 there were approximately 100,000. In 2013 there are approximately 15,000 left. Obviously, the aim of large-scale farming is to maximise profit in an industry that has recently struggled to do so.

However, mega-dairies are not really a solution to the problems facing the dairy sector, but are a symptom of the problems farmers face. It is time to refute the idea that mega-dairies mean more milk and therefore more profit and consider instead the profit lines from farms where animals live longer, have fewer health issues and where the impacts and costs to the wider community are reduced too.

Enter the Free-Range Dairy (FRD) initiative, founded by Neil Darwent, who has many years experience working in large-scale dairy farms. Neil founded FRD "to combat the air of inevitability about the trend towards mega-farms." He told The Ecologist that, "It is nonsense that small farms can't be efficient - they just don't fit within the modern industrialised systems that are currently being foisted upon farmers."

The FRD model promotes traditional pasture-based grazing for cows for 180 days of the year (160 in Scotland) - and effectively removes or reduces many of the concerns and problems associated with intensive dairy farming. Neil states, "Cows are born to graze, and grazed grass remains the cheapest and most environmentally-friendly feed available for UK dairy herds. Seasonally, there is no justification not to graze cows."

Darwent went on to explain how some cows in industrial farms often do not get to taste a blade of grass their entire lives, fed as they are on imported soya (potentially genetically modified and from deforested areas of the Amazon), maize and other cereals. "Indeed, despite the pastoral images in adverts and on cartons of milk showing cows contentedly grazing in fields, it is a fair question to ask, ‘Has this milk got grass in it?'" states Darwent.

Darwent believes that giving cows the freedom to graze in the summer is right for the cows, right for farming, and, at the end of the day, right for the consumers, because ultimately, FRD creates wider participation with farmers and supports them in their efforts to produce healthy milk, from healthy pasture. (In fact, it has been shown that milk produced from cows grazing on grass is actually higher in Omega-3 and lower in saturated fat.)

"FRD is about instilling the value of milk from pasture-based cows," says Darwent. "It values the welfare of the cow, the benefits to the environment and the skills of the farmer." A recent World Society for the Protection of Animals (WSPA) report ‘Not On My Cornflakes' showed that 95% of respondents to a survey in the UK said that they believed keeping cows permanently indoors was unacceptable. This shows that, despite the public's often vast disconnect from the produce they buy, animal welfare is a high priority. Darwent believes that farmer welfare should be too.

Interestingly, in 2011 Free Range Dairy carried out a farmer survey asking them about their attitudes to keeping cows, management priorities and the challenges to their businesses, and specifically asked them to state whether they agreed with the statement ‘Cows should have seasonal access to grazing'. Of the 600 respondents, 95% either agreed or strongly agreed with this statement. So it's not just consumers who think cows belong in fields.

So far, 75 farmers have signed the FRD ‘Pasture Promise' which Darwent hopes will become a ‘certification' that will be recognised throughout the UK as promoting good farming practices. It is hoped the logo of a bunch of clover and grasses being held aloft in a farmer's hand, will become as recognisable as the Soil Association standard. The Pasture Promise states that cows should be grazed outside for a minimum of 180 days (160 in Scotland), and that their winter diets should not be less than 60% forage. And, most hearteningly, that male calves should not be shot at birth, but raised for beef (giving them at least three summers with the sun on their backs.)

Neil Darwent is a pioneer and a visionary. He laughs when he recalls that not so long ago, he was "the most hated dairy farmer in the UK." But he is keeping faith with his vision of Free-Range Dairy because he knows that ultimately, it has so much more to offer than the industrial model of dairy farming. "It values healthy milk and healthy cows and the role of small farms in the fabric of the countryside and communities." Look out for the FRD logo in a farm shop near you! 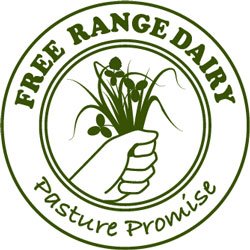 As an addendum to this article, The Global Forest Coalition released a report on 22nd May 2013 stating that industrial livestock production is a key threat to deforestation and biodiversity.