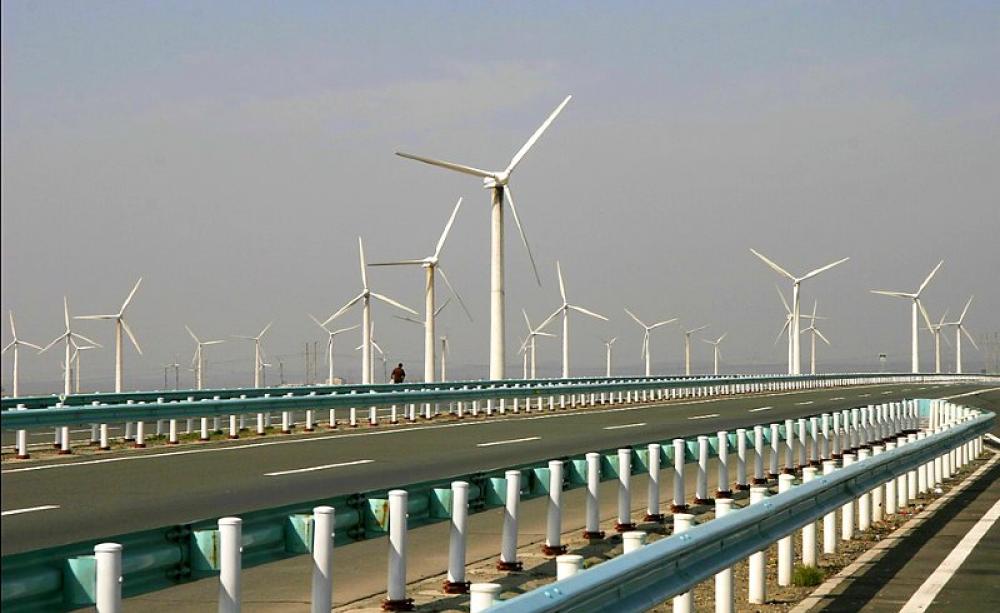 China has chosen its energy future - and it will be renewable. A huge windfarm in Xinjiang. Photo: Mike Locke via Flickr (CC BY-ND).
Renewable energy is all go in China, as set out in its climate pledge this week, writes John Mathews, with huge growth planned for wind and solar. The one big loser - coal exporters who can expect falling sales volumes in coming years. Wake up Australia!

China is so far in advance of those of other countries that it can only be described as an emerging renewables superpower. Wind and solar are racing ahead of nuclear, and hydro is being stabilized.

This week China submitted its emissions-reduction goals to the United Nations, in the lead-up to the Paris climate summit in December this year.

China's submission, known in UN parlance as its Intended Nationally Determined Contribution (INDC), follows similar submissions made in the past month by the United States, the European Union, Brazil and others.

China's submission is particularly important because the country has become the world's largest carbon emitter, as its manufacturing industry has grown to gigantic size, and because it is viewed as having played a negative role at the last major climate talks, in Copenhagen in 2009.

China's 2015 commitments are much stronger than those it was prepared to make in 2009, reflecting the enormous strides it has made in building the world's largest renewable energy industry.

The goals being aimed for by 2030 (which reiterate and elaborate on the goals announced as part of the historic November 2014 climate pact with the United States) include:

Note that these targets reflect a greening of China's growth (as reflected in its aim to reduce carbon intensity) but not an absolute reduction in carbon emissions.

These are moderating but can be expected to keep rising for at least another decade, until China's renewable power systems start to outweigh the coal-fired and fossil-fuelled systems that have powered the country's transformation to date.

The submission updates China's achievements in clean energy by 2014, which stand at:

Targets for 2020, although not included in the UN submission, have already been set by the National Development and Reform Commission. China is aiming for 350 GW of hydro, 200 GW of wind power, and 100 GW of solar power, plus 58 GW of nuclear.

These levels are so far in advance of those of other countries that China can only be described as an emerging renewables superpower. In particular, wind and solar are racing ahead of nuclear, and hydro is being stabilized at just a little above current levels.

China is so far in advance of those of other countries that it can only be described as an emerging renewables superpower. Wind and solar are racing ahead of nuclear, and hydro is being stabilized.

Moreover, China is using its submission as a means of demonstrating to the world that rhetorical commitments to carbon reduction ring hollow unless they are backed by real investments in green energy and resource systems.

China has made it clear that it sees its energy future in a very large renewables system (which it can build through its own manufacturing) based on huge investments in green infrastructure such as a strong and smart power grid, high-speed rail networks, and urban recharging systems for electric vehicles.

It will cost serious money, a significant amount of which will come from the newly launched, China-backed Asian Infrastructure Investment Bank.

What are the implications for other countries? China's submission makes clear that it views its climate targets as extending well beyond narrow energy goals, to encompass reforestation (which protects soil and inhibits flooding of rivers), clean urban development and green building, and sustainable transport and agricultural practices.

In this way it is providing a model for other developing countries that still see green industrialisation as a luxury suitable only for wealthy countries.

China has already had a huge influence on energy choices around the world through the cost reductions it has driven, as learning curves for solar panels, wind power, lithium-ion batteries and other green technologies help to reduce costs and expand markets. This is an unsurpassed mechanism for accelerating the diffusion of green technologies, an arena where China's efforts bear fruit for all.

There is also a real threat to China's coal suppliers, most of all Australia. China is signalling a firm intention to phase out coal - as it has already started to do, with coal consumption falling in 2014 and continuing to do so in 2015. This means that the coal exports that have attracted so much focus from both the current government and the previous Labor-led coalition have a very limited future.

The enormous market opening up in China for green technology is being ignored by a government that is apparently still obsessed with fossil fuels. China's submission to the UNFCCC provides a wake-up call.