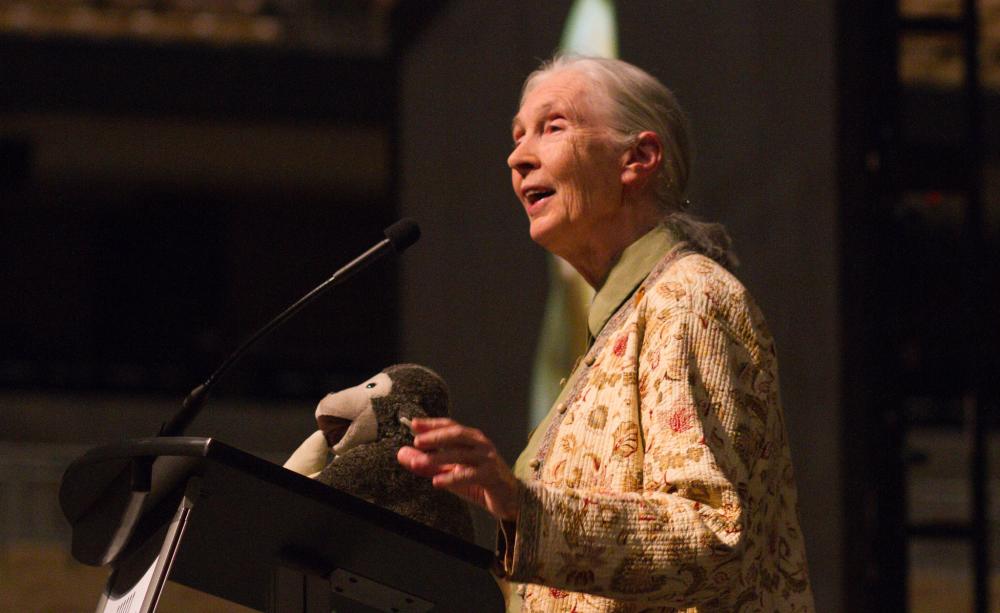 Flickr
Mark Schierbecker
How can anyone be proud of killing such magnificent creatures, asks leading primatologist Jane Goodall.

I simply cannot put myself into the mind of a person who pays thousands of pounds to go and kill beautiful animals simply to boast about their skill as a hunter.

The natural world is becoming increasingly threatened as we move into the twenty-first century. Yet some of the most endangered animals on the planet continue to be relentlessly persecuted by trophy hunters.

Scientific studies have demonstrated the links between trophy hunting and population declines. They also point to how wildlife populations have recovered when local moratoria on trophy hunting have been implemented. Yet the exports of hunting trophies continue to increase.

Dr Jane Goodall will be speaking at this year's online Festival of Wellbeing on Saturday 31 October 2020. Tickets now available online.

Walter Palmer, a Minnesota dentist, made international news in 2015 when he killed a lion called Cecil for 'sport'. Unfortunately for Palmer, Cecil was part of a long term study and  fitted with a radio collar, and subsequent investigations revealed the horrible truth about his death.

Cecil had been shot and wounded with an arrow from Palmer’s bow at around 11 o’clock at night. He suffered for at least ten hours before he was followed the short distance he had been able to travel and despatched with another arrow the next morning.

At least 600 trophy hunters kill lions each year. There are estimated to be only about 3,500 adult male lions left in the wild across Africa. Less than half inhabit protected areas.

The annual lion hunting quota is equivalent to one third of the males that can be hunted. It is thought that the loss of just 5 percent of healthy adult males may push the species past the point of no return.

The hunter will go after the most impressive males who will often be those who would have been chosen by the females of the pride. The lure for the trophy hunter of “bagging” a lion, and the pursuit of the most impressive animals, has led to the species’ gene pool ‘shrinking’ by 15 percent in the space of 100 years.

Elephant populations are in an even worse state because of the value of their tusks. The great herds that once roamed across Africa have largely gone. The number of elephants shot each year by trophy hunters and poachers is now greater than the number of calves born.

Most heart-breaking of all has been the systematic seeking out and killing of those with the biggest tusks – those known as the ‘Big Tuskers’ – whose ivory is so magnificent it touches the ground.

There are just 40 "Big Tuskers" left. Yet there are trophy hunters who would pay enormous sums of money for the ‘privilege’ of shooting one. And even if this is impossible, they still want to seek out and kill the ones with the biggest tusks available.

I simply cannot put myself into the mind of a person who pays thousands of pounds to go and kill beautiful animals simply to boast about their skill as a hunter.

The 200-plus years of murdering elephants with big tusks has had a noticeable effect – the tusks of elephants are getting smaller and tuskless elephants more common. This leaves them vulnerable: in a drought, having shorter or non-existent tusks will make it difficult or impossible to dig down to water from under dry river-beds.

Rhinos are among the most endangered large terrestrial mammals. As is the case with elephants, they are also cursed with  a part of their anatomy that has great value – their horns.

Despite their precarious status, there are those who are desperate to kill them, to add them to their macabre collection of trophies and secure the admiration of their like-minded friends. Just recently an American paid $350,000 to shoot a black rhino In Namibia.

Polar bears are even more endangered than white rhinos, yet the Canadian government still issues licences for non-Indigenous people to kill them. When one considers that they are also threatened by climate change that has led to the melting of sea ice, both the selling of and desire to buy a permit seem equally shocking.

During the years when I studied chimpanzees in Gombe national park I spent a great deal of time also observing baboons. They are fascinating animals with a highly complex social structure and great individuality.

Unfortunately, they have a bad reputation for crop raiding. While I can sympathize with an impoverished farmer who shoots a few of the thieves who have devastated his precious maize crop, I have nothing but scorn for a wealthy British trophy hunter who killed a male, female and a couple of young ones and then posed, smiling proudly, beside their limp bodies.

There are ranches which breed baboons and monkeys in order to provide hunters with easy to get trophies for their collections.

CITES has provided import and export permits for 40 different species of primates, our closest relatives, to provide individuals with opportunities to kill.

The first animal I encountered close up in Africa was a giraffe. Watching a group silhouetted against a red African sunset is one of the most glorious sights. Giraffe populations are plummeting – and one reason is that hunters want to shoot them for ‘sport’.

One American woman, Sabrina Corgatelli, boastfully posted pictures of herself grinning from ear to ear as she posed with the animals she had killed on her hunting safari. The photo I found most distressing showed her gloating over the dead body of a big male giraffe. She writes: “Such an amazing animal!! I couldn’t be any happier!! My emotion after getting him was a feeling I will never forget!!!”

I have tried to understand such an emotion, but I simply cannot put myself into the mind of a person who pays thousands of pounds to go and kill beautiful animals simply to boast about their skill as a hunter. In the very early days of the “White Hunter” there was sometimes an element of danger. But today, when animals can be shot from a distance with a high powered rifle, things are very different.

How can anyone be proud of killing these magnificent creatures? Magnificent in life, that is: in death they are merely the sad victims of a sadistic desire to attract admiration from their friends. When the hunter is overcome with joy after the killing, and shares that emotion on Facebook, then surely this must be the joy of a diseased mind?

Dr Jane Goodall is founder of the Jane Goodall Institute & UN Messenger of Peace. She will be speaking at this year's online Festival of Wellbeing on Saturday 31 October 2020. Tickets now available online.