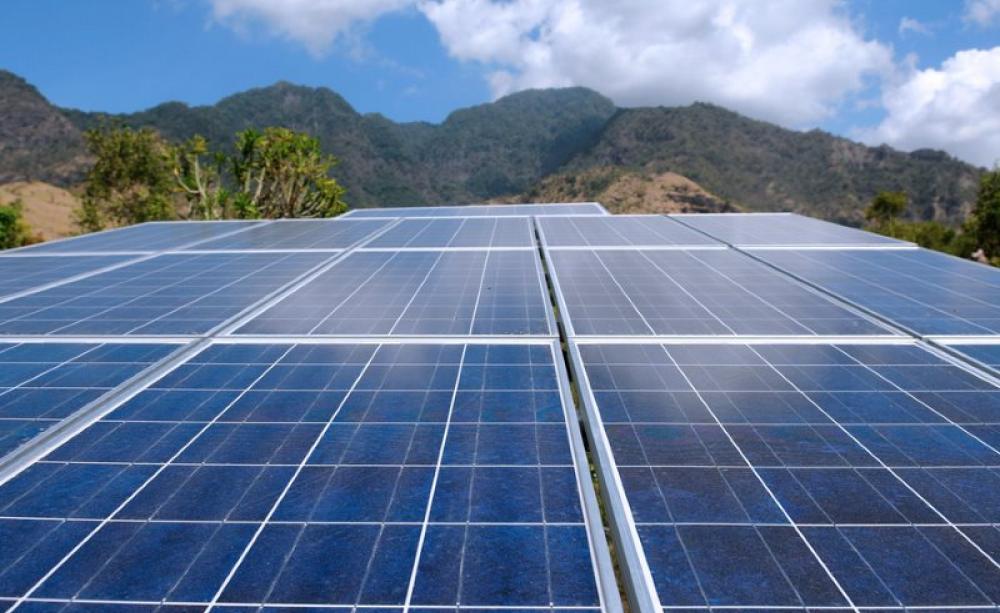 Solar farm on Bali, Indonesia. Renewables are a key part of the fight against climate change, but they can't do it on their own! Photo: Selamat Made via Flickr (CC BY).
Renewable energy may play a huge part in helping to achieve the ambitions of the Paris Agreement, now in force and under discussion at COP22 climate talks in Marrakesh, writes Steffen Böhm. But it can never be the whole story, and nor does it relieve the need for deeper changes in how the world works.

The Paris agreement doesn't go far enough. In fact, it might give us the impression of moving in the right direction, but actually the pledged actions are so far off what is needed, it spreads false hope.

The Paris climate agreement has now officially come into force.

Although Donald Trump and other climate change deniers have vowed to abandon it, most have hailed the agreement as a huge success and a significant milestone in our quest to limit the effects of global climate change.

But here's the problem: many climate experts warn that the commitments made at Paris still fall far short of what is required to halt global warming at the 2C mark, never mind reversing the growth of greenhouse gases in the atmosphere.

The simple truth is that the Paris agreement is blind to the fundamental, structural problems that prevent us from decarbonising our economies to the radical extent needed.

Take renewable energy. Among the most progressive leaders in business, government and NGOs there is a shared belief that, if only we could switch off the fossil fuel tap and quickly transition towards renewable energy sources, we still have a chance to save the world from runaway climate change.

All that's needed, they believe, is massive investment in wind, solar, geothermal and other renewables. International agreements such as those reached in Paris are what makes those investments possible, providing business confidence and policy commitment.

But while I feel part of this group of progressives, there are some hard facts that cannot be ignored.

First, the renewable schemes to date have largely been at the expense of unpopular nuclear installations, while the global share of fossil fuel-generated energy consumption remains at about 80-85%: just where it's been since the early 1970s.

Yes, massive solar and wind parks are being built around the world, but they haven't yet changed the business models of Shell, BP and other fossil fuel giants. On the contrary, they feel more secure than ever to invest in fossil fuel sources, particularly gas, which they see as a 'transition fuel' - here to stay until at least 2050 they say.

The Paris agreement doesn't go far enough. In fact, it might give us the impression of moving in the right direction, but actually the pledged actions are so far off what is needed, it spreads false hope.

Second, the massive amounts of land required for installing gigawatts of solar and wind power will destroy natural habitats and take away valuable farmland. This is already evident in the way existing biomass production schemes - forests in the US for instance, sugar cane in Brazil or palm oil in Malaysia - have had serious environmental and social side-effects to the extent that they have been labelled as 'greenwash'.

There simply isn't enough accessible land for all the solar or wind farms that would be needed to transition to a renewable future. Wherever renewables have been developed at the 'mega' level, they end up bulldozing, quite literally, people and wildlife.

And generally it's the poorest, usually rural, communities who are disproportionately affected, given that their land values are lowest and existing users have little power or formal land rights. For example, large-scale hydroelectric dam projects, currently the greatest source of renewable energy, have destroyed many human communities and flooded irreplaceable natural habitats.

Yes, offshore wind can fill some of the gaps, but it is more expensive to build and maintain than onshore, and the generated energy has to be transmitted over long distances.

Third, as French scientist Olivier Vidal and his colleagues recently pointed out, the shift to renewable energy will "replace one non-renewable resource (fossil fuels) with another (metals and minerals)."

Vidal estimates that 3,200 million tonnes of steel, 310 million tonnes of aluminium and 40 million tonnes of copper would be needed to build the latest generations of wind and solar facilities. Together with demand from electric vehicle manufacturers, a worldwide renewables boom would rely on a 5% to 18% annual increase in global production of minerals for the next 40 years.

Similarly startling projections are made for other materials oiling the wheels of green capitalism, including silver, lithium, copper, silicon, gallium and the rare earths. In many cases, supplies of these raw materials are already dwindling. The Toyota Prius, for example, one of the greenest cars on the market, relies on a range of very dirty rare earth minerals, the excavation and processing of which has devastated large areas of Inner Mongolia in China.

Lastly, the climate challenge is so urgent and huge that we actually need to remove carbon from the atmosphere, rather than just switching to renewables.

That's the view of prominent climate scientist James Hansen, the former head of NASA's Goddard Institute for Space Studies, who has shown that, even if we switched to zero-carbon energy sources today, we would still be facing a serious climate challenge for centuries to come.

What this all means is that the Paris agreement doesn't go far enough. In fact, it might give us the impression of moving in the right direction, but actually the pledged actions are so far off what is needed, it spreads false hope.

So, what is needed then?

These points raise uncomfortable questions that only those who can think and act against the grain dare to ask. I'm not saying that we shouldn't transition to renewable energy. Not at all. But that alone will not save the climate.

The world's climate experts and leaders in business, government and NGOs, who are about to gather in Marrakesh for yet another UN conference, would do well in starting to engage with this uncomfortable truth.

Steffen Böhm is Professor in Organisation & Sustainability, University of Exeter.