The palm oil crisis in Nigeria - and beyond 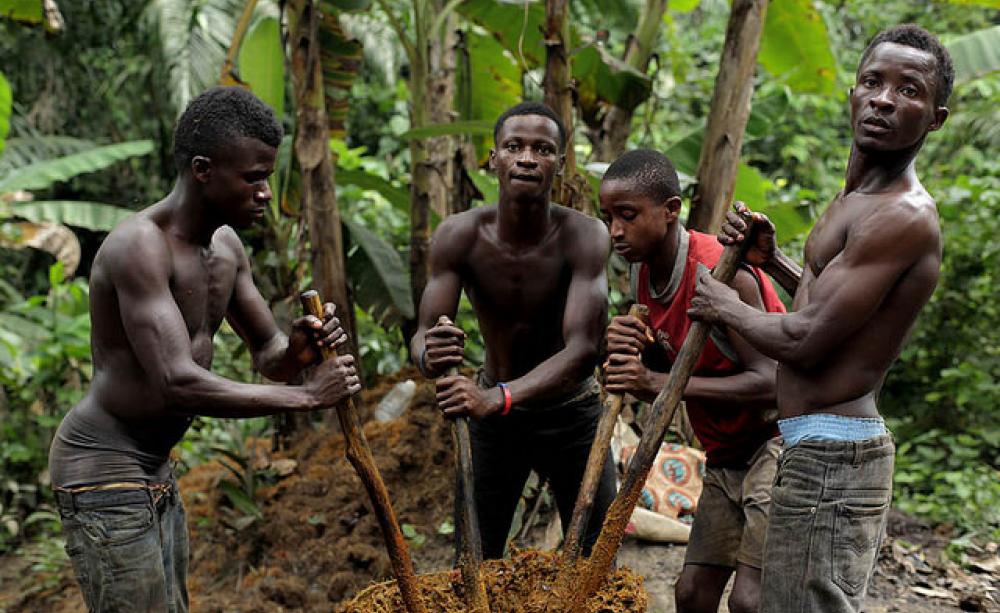 The Susu clan are self-sufficient and manage the land sustainably. They produce food to sustain themselves but also harvest cash crops like palm oil, rubber and sugar cane for income. (C) Friends of the Earth International, via Flickr
The use and spread of palm oil is beyond imagination; from cooking and manufacturing to pharmaceuticals and drilling fluids, it is even in nanny's chocolate cake. Its global consumption may have increased more than any other good, but what does this entail for the farmers? The crisis in Edo State of Nigeria speaks for itself, reports BURAG GURDEN

The most that locals could get was a donation of some acres in exchange for a gradual abandonment of villages.

Oil palm is a tropical tree, so the optimal level of moisture, soil type, and the best fit climate for it to flourish perfectly overlap with those of lush forests. Coupled with insufficient agroforestry practice in the tropical zone and mounting global demand for palm oil, land grabbing and palm oil production respectively boomed causing widespread forest losses and environmental damages as a consequence.

It is worrisome that every oil palm plantation stretches over a ‘forest graveyard’. Of those ‘gravediggers’; Indonesia, Malaysia and Thailand have the lead in palm oil production, as well as world’s highest deforestation rates.

The situation in West Africa however, particularly in Nigeria, is no less dire. The conflict here stems from the fact that many indigenous communities live off the forest and hence their livelihood is increasingly threatened with each additional hectare of forest cleared and converted into industrial oil palm plantation. The dispute over the conversion of indigenous lands in Okomu district of Edo State, Nigeria and the reactional public resistance is a well-rounded, yet a shelved example of such conflicts.

For decades, palm oil industry, supported by the Nigerian Federal Government, has been struggling to expand its capacity. In the 1960s, the government started to heavily promote large-scale plantations and mass production. Smallholders were geographically dispersed but kept supplying nearly 90% of the yield.

The government’s attempts got constantly denounced by civil society organizations for weak governance and high corruption, that mostly resulted in failures both for the industry and the country’s rich biodiversity. These attempts include the 1960’s Cross River State project and 1990’s EU-funded Oil Palm Belt project. In the end, both projects had to come to a halt due to strong local opposition despite considerable EU- and World Bank support.

Earlier this year, Godwin Obaseki, the Governor of Edo State since November 2016, disclosed an additional massive investment plan in the palm oil sector.

The governor proposed establishment of oil palm estates to be managed by the state government in partnership with local communities, adding that initial efforts to acquire land to that purpose were underway. A section from his statement reads as follows: “Oil palm is our new crude oil; it will be the key driver of our economic development …. We want to leverage on our high-yielding varieties and long tradition of oil palm production to acquire about 100,000 hectares of land for the development of new oil palm estates.”

One of the companies inheriting the state endeavour to revitalize the palm oil sector is the Okomu Oil Palm Company (Okomu Plc). It was established in 1976 by the Federal Government as a pilot project with estates covering a large area and it was privatized in 1990, becoming a member of Belgian investment group Socfin.

Besides 53.32% of Okomu Plc’s shares, Socfin owns oil palm and rubber plantations in Cote D’Ivoire, Cameroon, Kenya, Liberia, Guinea and Indonesia. The Company has since grown to become one of Nigeria’s leading oil palm companies, lifting its profit to new record highs for the last five consecutive years. But its operations in the field carried a high price for the environment and for the rights of local communities.

Okomu district is home to about 20 villages and several indigenous communities, while it also plays host to Okomu National Park, as well as to the operation fields of the rubber giant Michelin and Okomu Plc.

Indigenous rights is a controversial issue in Okomu ever since the government authorised land grabbing by agribusiness companies. Upon that, the forest land, that farmer communities used to cultivate, started to get surrounded by spiked fences and guarded by armed soldiers. Many communities lost not only their ancestral land but access to water, markets and hence they lost access to food as well.

In early 2010’s, a local resident described how life for the communities has been changing through the expansion of oil palm plantations by Okomu Plc in an interview with World Rainforest Movement: “Our experience started in 1998, when Okomu Plc destroyed three villages: Oweike, Agbede, & Ijawcamp; without villagers receiving compensation”, then he explains how the struggle came to a deadlock,  “The Police stated that as long as the company had the certificate of occupancy the village could not win [the fight] …. The federal government set up a committee to investigate but they never visited the villages. The committee report claimed that the villagers were illegal occupants...”

After tense negotiations, corporate encroachment resulted in an arrangement between the company and the host communities; or in other words, the most that locals could get from the company was a donation of some acres and empty promises in exchange for a gradual abandonment of villages.

The interview continues: “They also have the right to come and search every house at will. There is the constant accusation that we are stealing palm fruit.” He continues saying that over 20 villagers have been arrested. The agreement in fact gives the company the right to demolish their village at any time. He declares that in those three areas, plantations are guarded by soldiers who are paid by the company, “So we are slaves on our own land."

This year in June, Environmental Rights Action/Friends of the Earth Nigeria and representatives of the Owan and Okomu communities delivered a letter to Godwin Obaseki administration, urging them to uphold a revocation Order on 13,750 hectares of land expropriated by Okomu Plc in the rich Owan and Okomu forest reserves. The latter meant the revival of a long-standing reaction to persistence of corporate impunity and of institutional inaction against the mounting violation of indigenous peoples' land rights.

The action followed a protest march called “People’s March Against Land-grabbing and Deforestation in Edo State”, which was to expose Okomu Plc’s defiance of the revocation order.

Under former Governor Adams Oshiomhole, the sale of the lands in contention covering an estimated 13,750 hectares spread through Okomu and Owan forest reserve were reversed. However, Okomu Plc has been deliberately disregarding the government order for two years.

“In the process, over 60,000 rural farmers in the farming communities have been displaced” the ERA/FoEN disclosed in a statement on June 21 (extracted from the field report by Rita Uwaka, Project Officer and Coordinator for Forest & Biodiversity.

The letter also contains proposals on law enforcement, better compensation of local communities and fight against deforestation, which can be supported through the petition initiated by ERA/FoEN on 28 July.

The response from the local government came rapidly, where the Deputy Governor, Philip Shaibu’s supported the proposals in relation to the Okomu controversy, and asserted that the federal government should not stand behind and watch multinational companies undermine the rights of citizens, in the name of investing in the state.

The Edo State Chapter of the Stakeholder Coalition for the Protection of the Environment, which is a network of academics and civil society organizations involved in environmental justice struggles, has also supported both the civil march and Philip Shaibu’s promise to bring justice and resolution to the dispute between the communities and Okomu Plc, as well as the inconsistency between the local and federal government on the implementation of laws.

The recent developments towards a more participatory approach in solving the Edo State crisis clearly create a momentum towards an increased coverage in the media. It also means an opportune time to revive past claims of human rights violations and thereby it would pave the way to build a platform, which can motivate, or even enforce, businesses to consider better rights-based practices in their operations.

Burag Gurden is a postgraduate student at Lund University. He is also a freelance writer and contributor to the British ‘International Development Journal’, Turkish ‘Dunya Gazetesi’ and the international ‘Words in the Bucket’ community. Currently he is working at the EnvJustice project.